I applied for a job!

That's right, a job. This is a big deal for me. I quit my last full-time job in 2003, and I haven't applied for one since 2010 when I thought I might work at high school Erik's favorite museum. I love the freelance life, but I've been missing the feeling of being part of a larger team, and I found an organization that's hiring whose mission I believe in, so I applied. We'll see.

I've been thinking about diversity and inclusion. I'm lucky enough to have been born into nearly every overrepresented population, and I've taken advantage of that privilege to forge a decent freelance career. Lately I've been reading about bias in tech workplaces, and about how people can do better, and I always want to do better, but I don't have hiring power, or a workplace really, and I barely have coworkers, so a lot of what I read isn't advice I can use. I find myself wanting to work on a bigger team in part so I can try to be part of the solution... but on the other hand, maybe part of the solution is not hiring so many people like me. Still working out what I think about this.

Another big deal for me this week was giving two short technical talks. I haven't talked tech to an audience since the '90s, if ever. But lately I've started to think that I could be a pretty good conference speaker – like, I'm smart, and good at explaining things sometimes, and surprisingly well-liked by some humans. And after years of performing as a singer-songwriter and a comedic improviser, at least I'm comfortable being onstage. I just have to get over the feeling that if I know about something, everybody else must already know it too, so why would they want to watch a talk about it?

So on Wednesday at the JavaScript MN meetup, when the hosts asked who wanted to give a "lightning talk," I remembered how last month at the JavaScript MN meetup I decided to prepare something for this month. "Oh well, guess I'll do it next month," I thought, and then I realized putting things off until next month is how you end up never doing them. So I quickly edited a Vue.js component into something presentable and I raised my hand.

It went okay. I was nervous, and I talked too fast. More importantly, I should have started with what Vue is and why you should care, instead of diving headlong into the anatomy of a file you don't care about. But I got through it, and I learned some things.

Like, for example, maybe prepare something next time? So on Friday I made some slides, and at Minnebar on Saturday I signed up to do another lightning talk, this time about my very good experience making a very small contribution to Gatsby. And then I discovered I couldn't plug in the computer my slides were on.

So I made a running joke out of it, saying "next slide" to nobody, gesturing futilely at the screen where the slides would be. I felt comfortable, people laughed, and some of them told me later they'd enjoyed my talk. Hey, I might be able to do this! Now to think of a topic for my next meetup.

One more code achievement for the week: I improved the legibility of blog posts (and the shows page) on the arts side of this site, mostly by darkening the magenta I use on the home page. I also spent hours trying to implement a cool triangle-based idea (suggested by my friend Heather Quintal) that would have tied the pages together, but I couldn't make the CSS work. Can't win 'em all, I guess.

So it was a busy week codewise, and correspondingly light on arts. But Oncoming Productions had its first full-cast rehearsal for Five Fifths of Mary Poppins (coming up next Monday!). And I finally built us a web site – or, more accurately, a web page. Hardly even a full page. And most of it is an ad for our show that will be over after next Monday. Guess I'll keep working on it.

My improv trio I'm A Trio has an item up for bid in the HUGE Theater Hangout Auction. The idea behind this annual event is that people bid, not on products or material goods, but on a shared experience with improvisers or other members of the community. For example, you could come with us to the Minnesota Landscape Arboretum where we and you and optionally an additional friend will look at trees together. Who doesn't like trees... and company? Place your bid now!

I started a Facebook thread about what people keep on top of their refrigerators that was unaccountably fascinating and hilarious to me. I'm not sharing it here – those are my friends' fridges and they're personal. As for me, I've moved my copious junk food supplies into a cardboard box, and I'm now using that space for Pyrex bowls, Tupperware, measuring cups and spoons, and also whatever happens to be in my way in the kitchen. (This is how it begins.)

I'm not saying the reason I moved to my current neighborhood was to hang out at Bull Run Coffee, but that was part of it. The coffee was good, the baristas were cool, and the wifi signal was strong. Over the years, the name changed, Lee and Caleb started their own café, the other baristas I knew moved on, the coffee got worse, the wifi stopped working, and eventually the place shut down. But as of this Saturday, Lee and Caleb are back in Lyn-Lake, in the very space they'd left behind, in Five Watt Coffee's newest location. I guess I'll stick around. 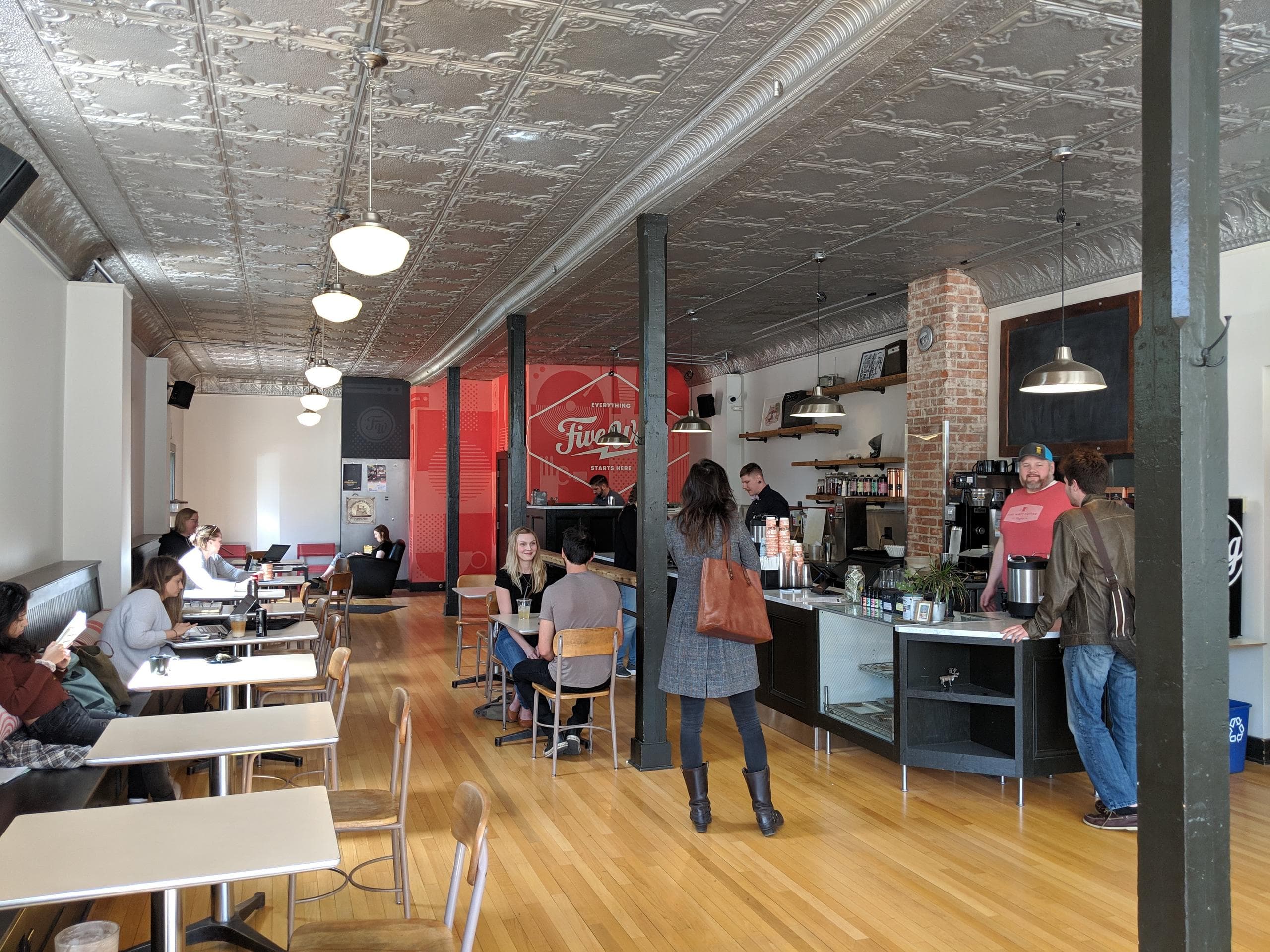